… is that it has a proven track record of getting the story you want to hide less engagement. Which is sort of the point. But when said news involves a publicly traded company, there will always be consequences once the weekend is over. In two days or three, the domestic markets will open up again, and we’ll all get to see whether the shitstorm you’ve recreated just blows over or is a Category 5. So far it would appear that Elon Musk’s decision to walk away from the counter at Twitter and leave empty handed has caused the company a financial weather event out of a Roland Emmerich film. 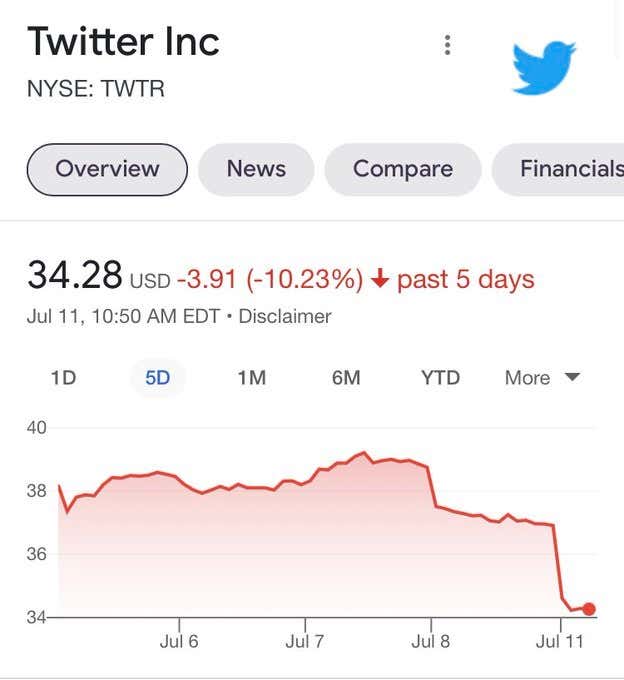 Musk on Friday pulled the plug on the deal, accusing the company of “misleading” statements about the number of fake accounts … [which] sets the stage for an epic court battle over a billion-dollar breakup fee. …

For analyst Dan Ives at Wedbush Securities, “this is a ‘code red’ situation for Twitter and its Board as now the company will go head to head against Musk in a Game of Thrones court battle.”

“We see no other bidders emerging at this time while legal proceedings play out in the courts.”

I don’t have the data to back this up, but I’m guessing that 9,999 out of every 10,000 billionaire philanthropist space pioneer electric car mogul weirdo serial impregnators would take a moment like this to lay low and let the lawyers handle it. He’s the other 0.1%.

Holy Schniekies. The one thing I never anticipated back when I was getting my Bachelor’s in Business from a state school was that any business deal could be this entertaining. I’d read about these sorts of things in the textbooks, listen to the lectures, write a paper or two, and never did the world seem like anything remotely fun. It all just felt like me to be competent, mature, well dressed people doing serious work in professional settings in a way that I could never relate to. My world was about getting out of class so I go home, eat, stop at the liquor store and go over my buddy Cliffy’s house to watch the last 15 minutes (the cool part) of McGyver followed by Monday Night Football. Which goes a long way to explaining how I never put that degree to any use.

But had I known then that a multi-billion dollar deal between a major corporation with incredible societal influence and an eccentric entrepreneur could be this ugly, petty, vindictive, spiteful and just straight up hostile, well maybe I’d have stuck with it and be a CEO by now. I mean, this way of conducting business is something any of us can relate to. This is schoolyard shit.

Like I said Friday, I acknowledge that a lot of people – maybe a majority – thing Musk never had any intention of buying Twitter, and this was all just a play for attention. Or maybe just good sport for him. That may be so, though I’m inclined to think the deal kept getting worse as Twitter refused to come clean on the Bot numbers and the stock value kept going down. And so now he’s just blowing the whole thing up in order to start the negotiations over from a better position of strength. Only time will tell who’s right on that.

But what we do know is that Musk is going to conduct himself as he always has. Mocking serious people. Using memes and sarcasm as weapons of mass destruction. All the while having unprotected sex with as many fertile women as he can. And in doing so, carrying out his business affairs in a way that does the impossible: Makes this stuff entertaining. Like I literally cannot wait to see what his next move is and what happens to this company as the week goes on. I haven’t had this much fun watching stock prices since Billy Ray and Lewis took down the Duke Brothers with Frozen Orange Juice futures.