On his blog, George RR Martin said he realized that the writing of “The Winds of Winter”, the sixth and final volume of his “Game of Thrones” saga, was taking him further and further away from the “Game of Thrones”. And warns that the end will probably be very different.

An update. George RR Martin does not like to talk about the writing of “The Winds of Winter”, sixth and last volume of his saga “The Iron Throne” which inspired the American series “Game Of Thrones“. Why ? Simply because fans have been waiting for the publication of his book for years, and some have already lost patience. The author also fears that, by revealing certain details of the story too much, it will end up depriving readers of the element of surprise when discovering the twists he has in store for them.

In a text published on his blog, George RR Martin, however, wanted to distance himself from the series broadcast on the American channel HBO, mainly with the conclusion offered to viewers, which had been the source of a colossal wave of indignation. Presenting himself as an “author-gardener” unable to predict how you will push his ideas, the author warns that the conclusion of the story in his book will be vastly different from that of the series.

“What I’ve noticed lately, however, is that my gardening (referring to his writing work, editor’s note) always takes me further away from the television series. Yes, some of the things you saw in Game of Thrones on HBO will also be in The Winds of Winter (although in a different way)…but a lot of it will be totally different,” he said. He also specifies that not all characters who died in the television series will necessarily be dead in the book. And that some who survived the screen will die in this final volume of the saga.

How much did the outcry caused by this last season influence George RR Martin in his distancing with a conclusion in which he – at least in part – participated with DB Weiss and David Benioff? We will probably never know. The author ensures that this evolution in the story corresponds to his way of working, as has always been the case. 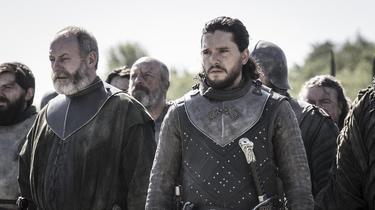 “I am at work in my winter garden. Things grow… and change, just like we gardeners do. Things pivot, change, new ideas appear, old ones turn out to be impractical, I write, I rewrite, I tear everything up and I rewrite again, I break down doors that are dead ends, and others which lead to wonders. It sounds crazy, I know. But that’s how I work. This has always been the case. And it always will be. For better or for worse,” he says.