2021 was an important year for me, as my blog (this blog, the one you are reading right now) turned 15 years old! [noisemaker sounds!!!!]. That’s a lot of years old. For a blog, anyway. 15 is also a pretty important crossword-related anniversary—maybe the only important crossword-related anniversary. The standard US crossword grid is 15×15, and now Rex Parker is also 15! Rex Parker, spanning the grid to give you the constant variety of crossword commentary: the thrill of victory, and the agony of defeat (dum dum dum DUM!) The human drama of … OK now I’m just channeling

but I do hope this blog has provided some insight, some entertainment, some commiseration, some solace, some sense of regularity during what are obviously pretty tumultuous and often lonely times. I hope it has enhanced your solving pleasure, giving you something to look forward to even (especially?) when the puzzle lets you down, and someone to celebrate with when the puzzle is wonderful. If it’s also given you someone to shout at in disagreement, that’s OK too.

A lot of labor goes into producing this blog every day (Every. Day.) and the hours are, let’s say, less than ideal (I’m either solving and writing at night, after 10pm, or in the morning, before 6am) . Most days, I really do love the writing, but it is work, and once a year (right now!) I acknowledge that fact. As I’ve said before, I have no interest in “monetizing” the blog beyond a simple, direct contribution request once a year. No ads, no gimmicks. Just here for you, every day, rain or shine, whether you like it or, perhaps, on occasion, not 🙂 It’s just me and my laptop and some free blogging software and, you know, a lot of rage, but hopefully there’s illumination and levity along the way. I do genuinely love this gig, and whether you’re an everyday reader or a Sunday-only reader or a flat-out hatereader, I appreciate you more than you’ll ever know.

How much should you give? Whatever you think the blog is worth to you on a yearly basis. Whatever that amount is is fantastic. Some people refuse to pay for what they can get for free. Others just don’t have money to spare. All are welcome to read the blog—the site will always be open and free. But if you are able to express your appreciation monetarily, here are two options. First, a Paypal button (which you can also find in the blog sidebar):

Second, a mailing address (checks should be made out to “Rex Parker”):

I’ll throw my Venmo handle in here too, just in case that’s your preferred way of moving money around; it’s @MichaelDavidSharp (the last four digits of my phone are 4878, in case Venmo asks you, which I guess it does sometimes, when it’s not trying to push crypto on you, what the hell?!)

All Paypal contributions will be gratefully acknowledged by email. All snail mail contributions will be gratefully acknowledged with hand-written postcards. I.Love. SnailMail. I love seeing your gorgeous handwriting and then sending you my awful handwriting. It’s all so wonderful. Last year’s thank-you postcards featured various portraits of my cat, Alfie, designed by artist Ella Egan, aka my daughter. They were such a hit that I asked Ella to design this year’s thank-you postcard as well, this time featuring both my cats. And this is the result. Behold this year’s thank-you card: “Alfie and Olive: Exploring the Grid”: 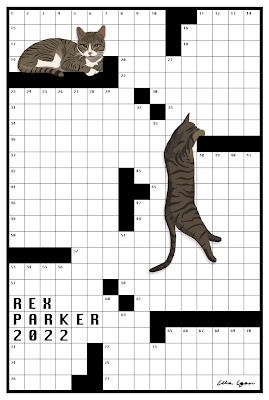 We went back and forth on whether she should add more black squares to make the grid look more plausibly fillable (that’s a Lot of white space), but in the end we decided not to crowd the jumping (or hanging?) Olive with more black squares, and instead just to leave the card as is, with the idea that the cats are exploring a grid that is … under construction. Anyway, this card is personally meaningful to me, and also, I believe, objectively lovely. I can’t wait to share it with snail-mailers (and oh, what the hell, if you are a PayPal / Venmo donor and you want one too, just say so in the message). Please note: I don’t keep a “mailing list” and don’t share my contributor info with anyone. And if you give by snail mail and (for some reason) don’t want a thank-you card, just indicate “NO CARD.” Again, as ever, I’m so grateful for your readership and support. Now on to today’s puzzle… 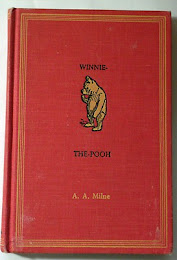 I’ll start with the place where I wound things up, which is the one part of this puzzle I really loved: the SE corner. I had THE NORM and ANTHEM in place, which put two “M”s at the front of 61A: Date format on digital forms (MM/DD/YYYY), and that made the answer sooooo much easier to get than it might have been otherwise. I have no idea if the unusual letter string in that answer flummoxed people or not. Maybe it was easy for everyone. I just know I felt lucky to have the “MM” up front. I did write in YEAR instead of YYYY at first, but that was easily fixed. I thought that answer was terribly clever. Tricky goal fair. And then that whole corner opened up, and everything about it really shined. There’s an old-fashioned vibe that is adorable rather than musty. “OH, BOTH!” evoked childhood memories of my mother reading Milne to me (over and over and over, mostly the verse but sometimes the Pooh stories as well). And then you’ve got old-fashioned terms like NATTY (I think I learned that word from “Peanuts,” weirdly) and MAKES HAY—I know the latter answer primarily from the expression “to make hay while the sun shines,” which I think is a kind of folksy updated “Gather ye rosebuds…” Childhood memories continued with MOUNT SHASTA, which we used to drive past every summer on our annual trip from Fresno to visit relatives in Oregon and Washington. We drank SHASTA soda too, and played canasta and spit-in-the-ocean in the back of our red-orange conversion van. Ah to be 12 in 1982 California again. Good times!! (nostalgia is a hell of a drug). The throwback fill in the SE is tempered by the slangy modern”REAL-TALK …”. It’s weird that this corner features IT’S BADbecause it’s not.

My feelings about the SE corner are basically rotationally symmetrical with those evoked by the NW corner, in that they are upside-down and backward. It’s not a bad corner, in retrospect, not really, but my experiences with ZOOM BOMBING make me inclined not to enjoy it as a crossword answer (19A: Crashing an online meeting). It sounds cute, but it was often used in really awful, disruptive, frequently racist ways all over the country, as trolls of various kinds took advantage of weaknesses in the system and user inexperience with the medium to f up what was already a pretty f’d up situation (pandemic, full lockdown). I DO YOGA so I didn’t mind DO YOGA too much… yeah, it’s rubbing me some weird way, but I can’t figure out why, so I’ll let that be. A word about UNE FEMME, though. I get that this puzzle is desperately in need of UNE FEMME, but you can do better than what is basically A PARTIAL. All this answer did was highlight how incredibly bro-ey and devoid of women this grid is. I mean, *two* Super Bowl clues? You already had MAHOMESdid you have to go back to the NFL for BUC? Hmm, maybe you did. You probably had to stay in the sports realm, anyway. The Pittsburgh Pirates (baseball) are sometimes referred to (familiarly) as the BUCs. Anyway, UNE FEMME (a single woman, a partial answer) stands more as an indictment than a marquee answer. It’s the exception that highlights the rule: UNE FEMME‘s place is (ironically) not in this puzzle. Dwarfs and SMURFS, but no human women. OKAY.
Notes: